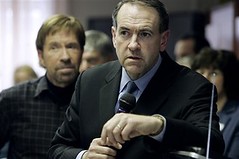 As you know, no politician is perfect. This includes the Baptist ones. Apart from the problems with immigration and healthcare, Ann Coulter takes him to task in her latest column for things that he should get right.

Asked on CNN’s “Larry King Live” Monday night about his beliefs on evolution, Huckabee rushed to assure King that he has no interest in altering textbooks that foist this fraud on innocent schoolchildren.

I don’t understand that. Does Huckabee believe Darwinism is a hoax or not? If he knows it’s a fraud, then why does he want it taught to schoolchildren? What other discredited mystery religions — as mathematician David Berlinski calls Darwinism — does Huckabee want to teach children? Sorcery? Phrenology? Alchemy?

Admittedly, the truth about Darwinism would be jarring in textbooks that promote other frauds and hoaxes, such as “man-made global warming.” Why confuse the little tykes with fact-based textbooks?

Although I’m definitely with him when it comes to whether the question of what do you believe about the origins of the world are practically irrelevant for the President of the United States, I also wonder what he truly believes. I get the impression that he doesn’t want to say, not that he does not have a position.

The other place he falls a flat is on sodomy and homosexuality.

Justice Antonin Scalia wrote a spirited dissent in Lawrence, joined by Justices William Rehnquist and Clarence Thomas, raising the somewhat embarrassing point that homosexual sodomy is not technically mentioned in the Constitution. Otherwise, our Founding Fathers would have been our “Founding Life Partners.”

Scalia said that inasmuch as the Texas law furthered “the same interest furthered by criminal laws against fornication, bigamy, adultery, adult incest, bestiality and obscenity,” the court’s ruling placed all these laws in jeopardy.

Most important, Scalia said: “Today’s opinion dismantles the structure of constitutional law that has permitted a distinction to be made between heterosexual and homosexual unions.” At least no court has tried to legalize gay marriage since that 2003 ruling, so we can be grateful for — Hey, wait a minute!

Huckabee claims he opposes gay marriage and says Scalia is his favorite justice, but he supports a Supreme Court decision denounced by Scalia for paving the way to a “constitutional right” to gay marriage. I guess Huckabee is one of those pro-sodomy, pro-gay marriage, pro-evolution evangelical Christians.

Is Gov. Palin Who We Think She Is?

10 thoughts on “The Problems With Huckabee”